Have you seen the Holywood blockbuster of “Kong: Skull Island?” Do you know that Ninh Binh of Vietnam contributed to a scene in the film? If not, let’s explore here.

Where is Ninh Binh?

Ninh Binh is about 95km from Hanoi, surrounded by Hoa Binh and Ha Nam to the north, Nam Dinh to the east, and Thanh Hoa to the west and south. Gaining the gift from Mother Nature, Ninh Binh has various scenery with mountainous areas in the west and northwest, and coastal parts in the east and south.

Moreover, it is also the first capital of Vietnam feudal regime of the Dai Co Viet as well as political, economic, and cultural center at that time. Therefore, thousands of vestiges of palaces, temples, pagodas, and tombs related to the three Dynasties of Dinh, Le, and Ly are the most appealing spots where tourists hope to discover when visiting.

A scene in the Holywood film

“Kong: Skull Island” was shot in the central province of Quang Binh and the northern regions of Quang Ninh, Ninh Binh in February 2016, released internationally in March this year. 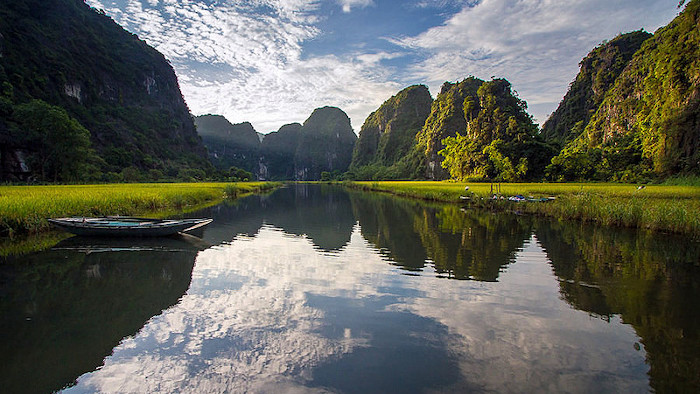 Its director and screenwriter, Jordan Charles Vogt-Roberts, was named Vietnam’s tourism ambassador on March 14. Trang An, Tam Coc - Bich Dong and Van Long wetland, the three famous tourist destinations of Ninh Binh, will appear in the blockbuster, expected to debut in 2017.

The board also explained that because the American studio was not charged when filming here, they were permitted to restore and turn the site into a tourism spot a specified period after the film’s release.

In 26th February afternoon, the crew of “Kong: Skull Island” arrived in Ninh Binh and started working for two weeks from 27th February to 15th March here. The first shooting location is scenic Trang An landscape complex, located 7 km to the west of Ninh Binh city and 96 km from Hanoi. On 8th March, the film continued shooting at the Tam Coc - Bich Dong and from 9th-15th March, the crew filmed in Van Long natural reserve.

It is not only a resort but also the most significant wetland natural reserve in Red river delta. It is located in the northeast of Gia Vien district. While “Kong: Skull Island” was filmed in Trang An and Van Long wetland, tourists were guided into other lanes in order not to affect the film making.

Restoration work had been underway for more than 20 days, and two out of three tasks had been completed, said a representative from the Trang An Landscape Management Board.

The restored area is the tribal village described in the film, with dozen of rattan tents being set up for decorative items. Besides, models of a ship and airplane resembling those used in “Kong: Skull Island” were also exhibited at the site, where parts of the movie were filmed and therefore named "Skull Island."

The selected context includes a 2-hectare-broad valley inside Trang An landscape complex (between Tam Coc – Bich Dong and the marina area of Trang An). 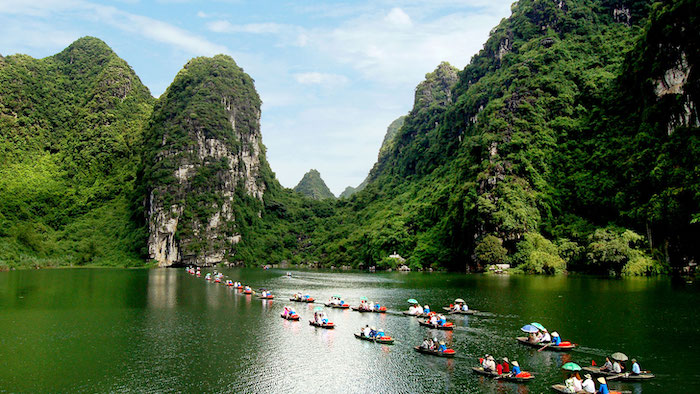 Thung ex is an aggregate combination of cultural heritage and natural heritage which was recognized by UNESCO in 2014 as the World Cultural and Natural Heritage site in Vietnam. The Vietnamese Government has recognized many heritages of the region as the special national relics including Trang An eco-tourism area, the tourist resort of Tam Coc – Bich Dong, and Hoa Lu ancient capital.

The entire region consists of the system of limestone caves and historic sites relating to the provision of Vu Lam of Tran Dynasty located in Ninh Hai commune, Hoa Lu. These weathered and eroded limestone mountains form many unique shapes and always bring excitement to visitors.

Van Long natural reserve boasts a landscaped and poetic beauty. The water is crystal blue which helps you clearly see the eye-catching moss carpet at the bottom. The breathtaking beauty of this place is also added by the majestic limestone mountains which have been largely eroded, making a virtual cave system.

Before that, in 7th April 2017, during a practical session with Ninh Binh provincial authorities, Prime Minister Nguyen Xuan Phuc said, the film “Kong: Skull Island” helped promote the tourism in Ninh Binh very well. So, leaders of Ninh Binh province should consider the advantages of the opportunity to promote tourism.

The Prime Minister urged the northern province of Ninh Bình to make tourism the driving force of the local economy to turn the area into a must-visit destination in Vietnam.

The director's return to Ninh Binh 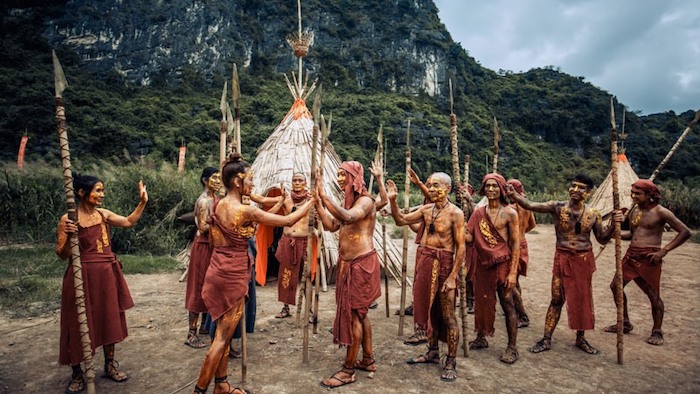 A film studio in the film

After releasing the film, Vogt-Roberts who is the director as well as Vietnam's Tourist Ambassador arrived at Trang An on May 10 and visited the film set which now has turned into a tourist destination. Vogt-Roberts also met the local extras that appeared as tribe villagers in the film.

He expressed gratitude to the locals that helped to make the film a success. Then, he went on to say that he was impressed that the location had been so carefully rebuilt and glad that the destination also created jobs to local people. For the director, he said, it was delighted and respectful that the film he produced could bring the images of the country to international audiences.

Moreover, as a tourism ambassador, he hoped to do well in promoting the tourism industry in Vietnam as well as Ninh Binh province to the world so that more foreign films will be made in Vietnam.

As a significant part of “Kong: Skull Island” shot last year in three provinces of Quang Binh, Ninh Binh, and Quang Ninh, the local authorities planned to open a tourist route to connect those three locations. For more information about Vietnam tours, Sapa tours review, or Sapa trekking tour price, feel free to contact us. If you find the article interesting, don’t hesitate to like and share with others. Thank you.