Folk Dances of the Xa Pho in Sa Pa

The Xa Pho ethnic group has a population of over 1,000 people in northwest Vietnam, residing in separate villages between high mountains, mainly in the districts of Sa Pa, Van Ban and Bao Thang around Lao Cai City. They live primarily to cultivation, livestock, and poultry.

Like other ethnic groups, they have their unique traditional dance without any mixture from different ethnicities. The dance has been handed down from generation to generation through traditional teaching methods (mother to child and grandmother to grandchild). Each generation appreciates receiving the skill, and carefully preserves the unique dance style.

The Xa Pho culture emphasizes a very strong sense of community, and this is also seen in their dances. Different types of dances are performed collectively by groups of five to ten people in straight or curved lines. Dance costumes include sashes in various colors. In the dance movements, the left-hand use a musical instrument, while the right hand holds the sash (blue, red or white) following the beat.

The musical instrument accompanying the dance is called Ma Nhi, an instrument unique to the Xa Pho, along with a musical instrument using seeds. The women dance and beat the rhythm at the same time. Before the dance, each person performs eight beats, with emphasis on beats 3 and 4 of the form. Men and women have separate dances, seldom dancing together. 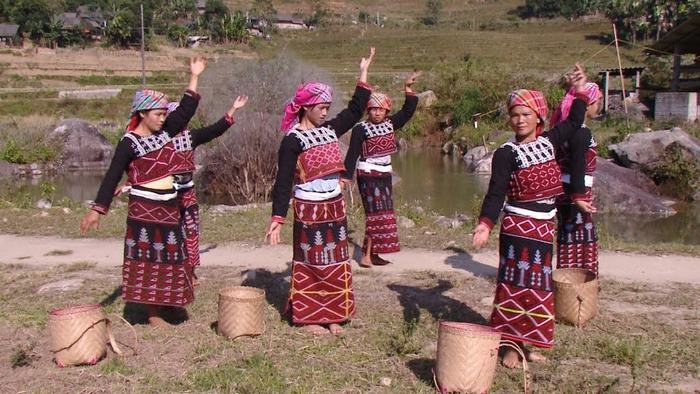 For performances, girls often wear the traditional skirt and shirt of indigo fabric which they have woven themselves. They embroider and decorate their clothes elaborately and beautifully.

On every festivals or holiday, the towel dance of Xa Pho girls is an indispensable part. A dance usually consists of six to twelve people. When dancing, the girls wear colorful traditional costumes with a bell including three fruits on the right hands and a small handkerchief on the left hands.

Retaining the dancing of this region 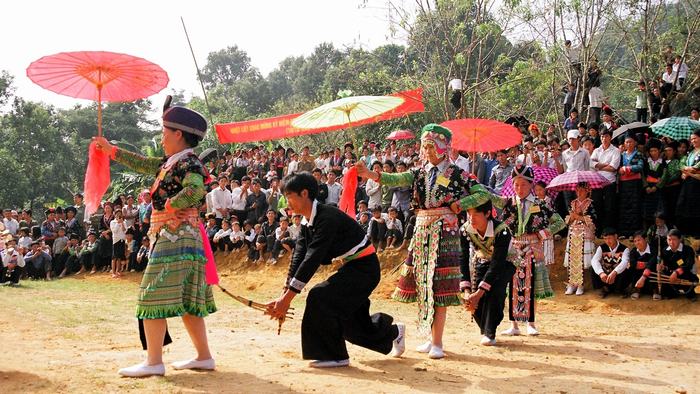 Currently, in Nam Sai commune, there are two performance teams with dozens of members voluntarily participating. They often sing during the holidays, celebrate new homes, new rice, wedding and love singing. Unlike Tay, Hmong and Thai folk songs often have musical melodies or colors; the Xa Pho folk songs appear to be more serene, at first glance like a monologue, narrative rather than a harmonious and bright melody. However, the content of each folk song expresses the mood of the singers in specific circumstances.

The Xa Pho does not have their writing. They keep and teach folk songs from one generation to the next by word of mouth. Therefore, learning folk songs requires passion. Every family with an elderly person who sings is a folk treasure that needs to be kept. Xa Pho folk songs have old lyrics and also have self-acting and self-giving lyrics according to each situation. The song may be like a story, a greeting or a particular feeling.

These dances are vital activities which both promote and demonstrate the community cohesiveness in Sa Pho culture. During festivals, the Xa Pho dances are the most attractive activity, accompanied by lively tradition games. Let's join our Sapa tours to have the chance to take part in this exciting dance.

You can visit our website to get further information about places to visit in Sapa. If you have any questions, feel free to contact us. Share this article with others if you find it helpful. Thank you!

NAVIGATE Folk Dances of the Xa Pho in Sa Pa